In spite of numerous efforts to eliminate cracks from concrete structures, there are still many cracked concrete structures. Some cracks are very harmful and should be repaired as soon as possible, while other cracks are almost harmless. Therefore, a good guideline on how to deal with cracks in concrete structures has long been needed. JCI first published Practical Guideline for Investigation and Repair of Concrete Structures in 1980, a second version followed in 1987, and a third version was followed in 2003. In this third version, the English edition was also published. It was presented in Singapore in a seminar in March 2005 which was overwhelmingly received. Then in 2009, a fourth version was published in Japanese in 2009. This volume, titled Practical Guideline for Investigation, Repair and Strengthening of Cracked Concrete Structures -2009â€œ is the English edition of this latest version. It is believed that this guideline will be of much use when cracks are detected in existing concrete structures, both in Japan and overseas. JCI-SCI is pleased to announce this seminar in which all seminar participants will be given a copy of this latest guideline. 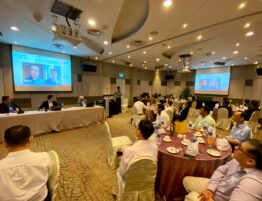 Dr Rupert. J. Myers, from Imperial College London, spoke on the topic “Relevance of the Circular Economy in Decarbonising Construction”.  The seminar is hosted via a hybrid online-cum-F@F platform” with an online participation of over 30 pax and a physical attendance of over 50 pax.  Photographs taken during the event is shown in the Photo Gallery. 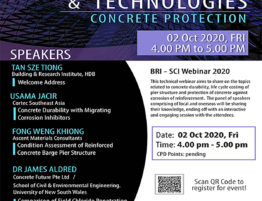 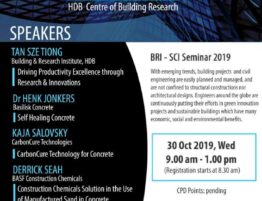 Dear Members, We are pleased to invite to you to following SCI event

This Seminar aims to present the specific nature of Calcium. Aluminate Cement (CAC) and the Engineering properties of CAC based concretes. A special focus is made to explain the exceptional durability of CAC concrete exposed to H2S biogenic corrosion in sewers. The relevant standards will also be reviewed. Examples of actual projects made with CAC concrete are presented.